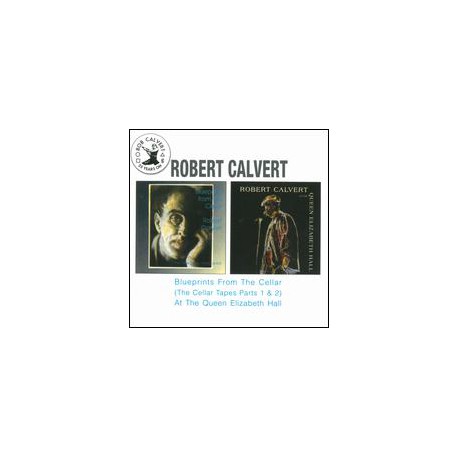 Robert Calvert - Blueprints From the Cellar / At The Queen Elizabeth Hall

In the 1980s Bob Calvert - the late resident poet and on-and-off frontman for the space rock kings, Hawkwind - was developing a musical career of his own until he suddenly died of heart failure in August 1988.

Development of new songs, experiments with commercial electronic music and the reworking of old songs was carried out at his home in Margate. Absorbing this material into his overall stage repertoir , he'd then go 'out on the road' and perform it.

This release covers both aspects of this process. He was, sadly, never really noticed by the wider public or by the general music broadcast media. He just never became fashionable. His output has been compared to such diverse performers as Gary Numan, Syd Barratt, Brian Eno and Michael Moorcock but perhaps there's only one label that really counts: Bob Calvert.

This pairing, then, is a must for all fans of the man's work, displaying both musical sides: the flamboyant stage performance and the quieter and more thoughtful feel of the studio. Blueprints From The Cellar is a CD version of some home created demo's and experiments, originally released informally to fans by mail order as The Cellar Tapes - available in cassette tape form only.

Many fans of Calvert and the general Hawkwind-related music scene were unaware of these two cassette releases, as promotion was by word of mouth only. Ah, the days before the World Wide Web. Many of the tracks also appeared on his albums Test Tube Conceived and Freq, and many were performed on the live portion of this release: At The Queen Elizabeth Hall.

This performance was recorded live in October 1986; it was originally released on vinyl, but sadly in very limited quantities and again sadly - since it was his first live album - after his premature death. Stage performances in 1986 were enabled by accompanying bands Maximum Effect and then Krankschaft. Maximum Effect was formed from Nik Turner's band Inner City Unit.

Also in this year his own recording of poems - collectively called Centigrade 232 after the temperature at which paper will burn - saw its first audio release. Most of his gigs consisted of a mixture of poems and songs, and sometimes sketches and tangential interractions with the audiences. Sometimes under some pressure to "do some Hawkwind" he often preferred to be thought of as a poet and playwright. Space rock, he told me once, is "old hat." That was way back in 1977!

The second half of this pairing, the Blueprints disc, allows us to, in effect, peep over the shoulder of a craftsman honing his musical creations in his workshop, the spools on the old Revox sedately turning. Some of the songs done during this era were developed and augmented to the point of being ready for transfer to the next-intended studio album; others were little more than rough outlines or embryonic ideas that weren't carried forward to fruition. Songs about diamond mines and Soweto (a shanty town area of the city of Johannesburg) remind us of his interest in his country of birth: he was born in South Africa, although he left there at the age of two when his parents emigrated to England.

Lyrics like home computers now / that can keep an eye on you' make one wonder what Calvert would have thought of the current age, 25 years on, where computer-assisted spying is part of normal everyday life. Other themes that he explored range from the interations between people and technology through to feelings and fears - and even the worlds of factory work and espionage! ('In a house-boat on the Nile...secret papers from a file....') While the audio quality falls somewhat short of that of a soundboard recording, it is an invaluable document of this era of the Captain's composing and performing genius.