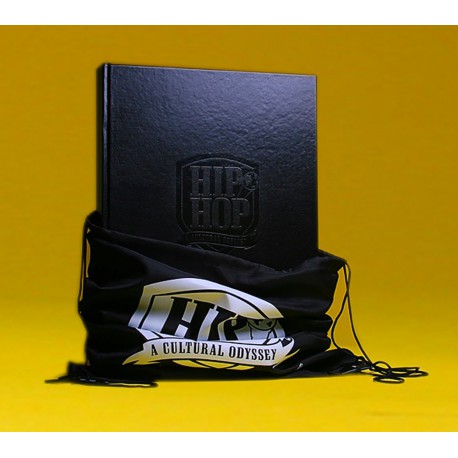 From the Inside Flap

Hip-Hop A cultural odyssey The definitive tribute celebrating an extraordinary movement that has inspired, educated and entertained people the world over.Hip-Hop A Cultural Odyssey is the colossal 420 page Smyth sewn leather bound definitive tribute that celebrates the extraordinary movement that has inspired, educated and entertained people all over the world. It has been referred to as the hip-hop bible. This luxury, large format book contains over 300 spectacular photos, 250 original essays, profiles and testimonials written by Hip-Hop's top journalists, authors, MCs, DJs and B-Boys covering all aspects of the culture and profiling 40 icons who changed the game.It's the ultimate hip-hop collectable coffee table book, measuring an impressive 13 x 18 inches and weighs 15.5lbs.See more at www.hiphopculturebook.com Endorsed by Industry Influencers It's our take on our own history and what our contribution to the culture has been. Cee-lo Green Thank you for a great gift - not just to the music community, but to the whole world. Will Smith As bold and colorful as the larger-than-life people who built its history. - USA Today This book... will become an important asset to American history. Russell Simmons An essential literary and photographic collective of Hip-Hop's essence. The Source Magazine The creatively crafted book tells Hip-Hop's story... in such an in-depth and innovative way. Vibe.com Its contents are fascinating... the attention to detail, the love that's gone into telling Hip-Hop's stories here. GQ (UK) The most comprehensive and visually stunning hip-hop text I've ever seen (and I've seen pretty much all of them!) - Craig Wilson President & CEO, National Museum of Hip-Hop

Since his first foray into the music business at the age of 15, Jordan Sommers has enjoyed a 20+ year career as a producer, writer and editor in a variety of entertainment media. He developed gold and platinum-selling artists as A&R for a major record label (Def Jam), supervised original motion picture soundtracks for major studios (Warner Bros, MGM), served as a segment producer and writer on a globally syndicated talk show (KingWorld), created, produced, wrote and hosted a nationally syndicated radio show in the U.S. (Westwood One) and consulted on over 250 projects for iTunes. He is also a member of the Writers Guild of America. Sommers is a founding partner of ARIA Multimedia Entertainment and brings to ARIA his exceptional production experience and editorial expertise. He oversaw all content creation associated with the release of Hip-Hop: A Cultural Odyssey